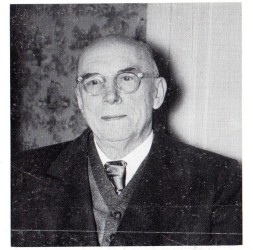 Mr. Bissell at the Kurn Hattin Homes for children

J. Walton Bissell was born on September 24, 1874.  His only sibling, Grace Amelia Bissell, was 11 years his senior.  She died of pneumonia at the age of 36 in the home she then shared with her brother and mother on Marshall Street in Hartford.

J. Walton Bissell's father was a merchant who sold leaf tobacco and cigars on State Street in Hartford.  His father had worked as a "shoesealer" in his teens, had "traveled west," and subsequently settled in Hartford at age 24.  There he met and married Lucy A. Bissell (nee Porter), who would become the mother to Grace and J. Walton.  The family of four purchased a home on Chapel Street in Hartford; they sublet rooms to boarders during this time. 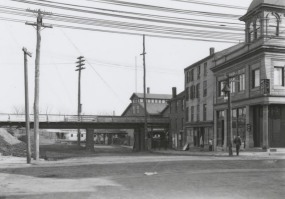 State St. and Commerce St., PG 430, Thompson Photographs of Hartford, ca, 1903-1906, State Archives, CT State Library. Published with permission. The tobacco business was at 220 State St., which is on this block. The river is partly obscured by a ferry.

J. Walton Bissell completed an 8th grade education. While contemporaries of his in and outside of his extended family attended public high school in Hartford at the time, he never enrolled.

He would later create from scratch and sustain a fund to "enable [orphaned] boys and girls with their high school training."  He instructed that the resources might be used for books, supplies, medical attention, nourishment, or other needs.  He wrote: "My thought in doing this is that it is difficult sometimes for high school students to really prove their worth because they are under the necessity of spending a large part of their time earning their way which should be given over to study."  The challenge was one he knew personally.  He became fiercely generous with his earnings.

Mr. Bissell never married, and he had no children.  He was self-employed, working from a garage turned into an office at his home.  He made fortuitous investments in real estate and in a voice recording device.  Individuals who knew J. Walton Bissell described him as "gentle but strong-minded," as "always interested in new things," as rather solitary while finding kinship in friendships, and as "taking almost child-like pleasure in events and experiences."  He died October 8, 1959 at the age of 85.  Before his death, he endowed a foundation with his assets, establishing a mechanism to fund charitable endeavors in perpetuity.

Published at the time of his death by a school that Mr. Bissell supported:

"News was received on October 8th that Mr. Bissell passed away early in the morning of that day.  Mr. Bissell was a most unassuming man.  He wanted no publicity for any act of kindness of his and would not appreciate even this bit of recognition.  He was a person who loved people and enjoyed visiting and talking with them.  The worst cross he ever had to bear was the deprivation of the ability to speak during the last three years of his life.  Nevertheless, he maintained his friendship with a great many people even to the end.  He was a man of extreme humility.  Although he possessed financial accumen, beyond the average and used it in many different ways to accumulate a substantial fortune, nevertheless, the money itself did not interest him so much as the fact that he

through his foresight and ability to choose the right people was able to render service by building up enterprises which had been given up for lost.

Mr. Bissell was particularly interested in young people and the handicapped.  He tried in many ways to help them and was always happy when he could see that some of the funds he had accumulated were really accomplishing something for others. ... He lived fully and well to the very end.  He stubbornly clung to life when others would have given up.  His good work will live after him for generations to come."